I believe sin is the willful disregard for the things of God. It includes the intentional denial of God’s existence, the intentional disobedience to the commandments of God, pride, and placing anything above God (such as self, money, family, fame, status, etc.) As we explored last week, sin actually originated in Heaven. What’s more, we are all sinners but Jesus is our antidote to sin:

For there is no difference; for all have sinned and fall short of the glory of God, being justified freely by His grace through the redemption that is in Christ Jesus, whom God set forth as a propitiation [atonement, payment] by His blood, through faith. (Romans 3:22-25, NKJV).

But how else can we define sin?  Plantinga states that, “in short, sin is culpable shalom-breaking”[1]. Additionally he states that “sin is blamable vandalism” against God’s design of shalom and is thereby “an affront to their architect and builder”[2]. These quotes help me begin to ponder a wider definition of sin, but they are incomplete without Plantinga’s definition of shalom which “means universal flourishing, wholeness, and delight—a rich state of affairs in which natural needs are satisfied and natural gifts naturally employed”[3] (emphasis in the original). Sin, as Plantinga presents it, is a willful or intentional thought or act that somehow disrupts someone’s or something’s flourishing. This is somewhat of a flimsy summary without a concrete, though somewhat minor, example. 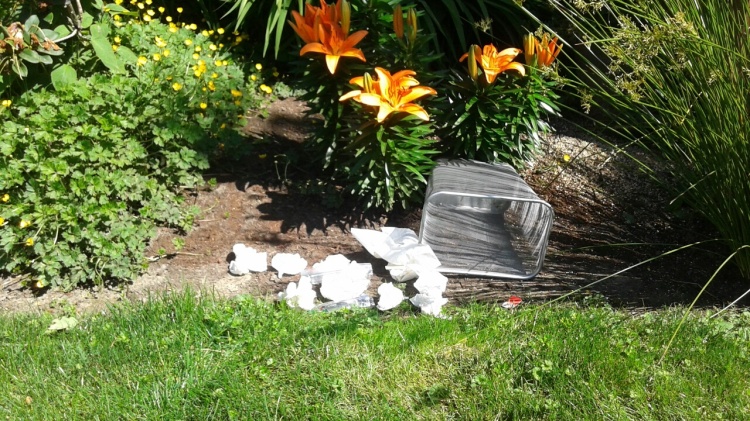 This is a simple illustration of something we have all seen, and quite possibly have done: litter. If I litter, something like throwing trash onto a beautiful landscape, I’ve now willfully disturbed nature by introducing a man-made artifact into the natural beauty. I have littered; I have juxtaposed God’s creative beauty with my personal refuse. I have opened the door to an animal or bird mistakenly eating a littered item and possibly getting sick or dying because of it. I have also marred the aesthetic beauty of the area, thus diminishing another person’s joy of what could have otherwise been a peaceful spot of solitude and praise toward God.

I have disrupted the shalom of an otherwise pristine beauty. This blemish now retards the flourishing of both the natural realm and the relationship to other humans because they now to have to endure this blemish. This other person may be the one to fix the blemish in an attempt to restore the area to its near natural state. How do they do this? By picking up the ugly trash I left behind. Once they pick it up, they have to properly dispose of it. This person is now not only enduring the blemish, but is now having their time impacted due to fixing someone else’s vandalism.

I realize this example does not rise to the same level as adultery or murder, but it is a subtle and important, though not readily recognizable, example of shalom disturbance. It illustrates the tarnished interior of the functional aspect of the image of God discussed last week. It is the insidious nature of sin working in simple areas of our lives where we willfully disturb shalom. As this willfulness grows, it expands into greater expressions of shalom-disturbing acts. So take this simple example of littering into other areas where we begin willfully harming humanity.  If littering is shalom disturbance, thus sin; then how much more of a “shalom disturbance” are the easier to recognize sins such as lying, rape and murder?

But lest we lose hope, this flawed aspect of our image of God can begin to be rehabilitated through Jesus Christ:

“Repent, and let every one of you be baptized in the name of Jesus Christ for the remission of sins; and you shall receive the gift of the Holy Spirit.” (Acts 2:38.)