We had Spring Cleaning yesterday. I know, we’re heading into winter, but we need to weed stuff out of the house in the last vestiges of good weather. One of the things carted off was an old cabinet thing of my Grandpa’s. It was ugly, beat up, and only marginally functional; but it was Grandpa’s.

All day Janey and I toiled over boxes of stuff (actually, junk), old pictures in broken frames and a bazillion Lego pieces. But looming off in the fringes of darkness was…the cabinet!

“Soooooo is this going to go to the Goodwill,” asked Janey.

“Uh…I gotta go finish off this other box.”

Beyond just the cabinet is that for some reason I’ve been feeling a bit odd, a bit, well, vulnerable. I don’t really know why. I’m happy with work. Janey and I are doing great. But I think it’s that we’re on the verge of making a big decision, one that will ripple significantly through our lives for the foreseeable future. It brings with it long-term commitment and dreams; dreams of a second career and more advancement of God’s Kingdom on earth.

The decision entails risk but so many good things never happen because the risk is feared and therefore avoided. Right now, depending on how things go, we’re planning on going for it, risk and all. We both firmly believe God is leading us into this direction. Still, butterflies are flittering around in the old stomach region and they always bring with them a fluttering sense of vulnerability.

But what’s this have to do with the beat up, old cabinet? Well, perhaps because the cabinet symbolizes in some weird psychological way a safer time in my life. A time when others made the big decisions and I just came along for the ride. If things worked out, great; if they didn’t, it wasn’t my fault and I didn’t have to fix it.

Oddly, though, the Apostle Paul never instructs us to hold onto the past. Instead, he said reach for the future and forget the past.

Janey even said something like that, but it was after I decided she could take it to Goodwill. 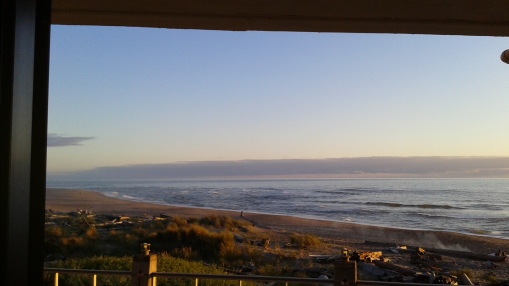 When she got home she said she was proud of me for letting go of the past to make more room for our future. And it’s interesting, while Paul says that there’s one thing that he does; that one thing actually has two components to it: he forgets the past while reaching forward. So I guess in a way, the old cabinet also symbolizes letting go of a material thing to instead reach forward to the goal God has set in front of us. Hopefully someone who loves to refinish old beat up stuff will pick it up. But meanwhile, Janey and I will continue pressing forward toward a new goal, a new horizon, a new journey.