Bride and Groom lived in the suburbs. She was a happy medical biller and he a content bureaucrat. Then one day while in the shower, Groom noticed a lump where there shouldn’t be a lump.
“Hmm,” thought Groom, “wonder what that is.” He pushed in on it. It was squishy. “Eww,” he said. “Well, maybe it will go away,” he thought happily.
As time went on, not only did the lump not go away, it got bigger and started to hurt. “I’ll ask Siri what this is,” he said to himself. The ever-subservient Siri complied with a host of possibilities. Some were disturbing; Groom ignored those. Instead, he thought that a hernia was the likely culprit; an inguinal hernia to be exact. In fact, the lumpiness looked like it could be two hernias, “Oh, yippee,” he thought. “Better go see my doctor.”
After dropping his drawers and being poked and prodded by the doctor, she looked him in the eye.
“Yep, it’s a hernia. Looks like two in fact. You’ll need surgery.”
Groom gasped! “Surgery,” he exclaimed. “Don’t these things heal themselves?”
Looking at him pitifully, she delicately said “no. You have a hole in your abdominal wall and your intestines are sticking out.”
“Eww,” thought Groom. “Is that the squishy bit?”
“Yep. It needs to be stuffed back in and the hole needs to be closed. Your body can’t do that. But a surgeon can. I’ll get you a referral.”
“Oh, yippee.”
After a few more visits with the surgeon, some painful tests, more drawer dropping and poking and prodding; the fateful day was set. A double inguinal hernia repair was on its way. It would be done by laparoscopy through three small incisions in the abdomen.
Meanwhile, Bride was having to pick up some of the household chores Groom could not do because of pain and possible further injury. The evening before Groom’s surgery, Bride was dutifully rolling the packed-full garbage bin to the curb. She was contemplating the logistics of the next morning when she tripped; rolling over the outside of her left foot she fell down. Just at that time, a neighbor was walking by, but she politely looked the other way and acted like nothing happened. Bride then had to hobble to the curb then half hobble, half lurch back into the house.
“Oh no,” exclaimed Groom, sitting up with a yelp. “What happened?”
Bride explained the whole thing to him, he felt terrible; it was all his fault. He then sprang into action getting ice and ibuprofen.
“Probably just popped a ligament,” he said unreassuringly.
Well, in the fullness of time, both Bride and Groom drove to the hospital in the wee early 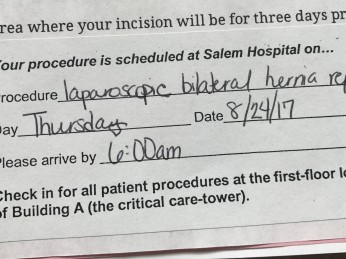 morning hours so Groom could check in with the surgery folks and get his groins repaired. After dropping Groom off, Bride, with tears of pain in her eyes, drove the short distance to the hospital’s Emergency Room. And wouldn’t you know it, that as Groom was being prepped for surgery, Bride was being diagnosed with a broken foot. Now both Bride and Groom could be laid up together at the same time; hopefully Youngest Son would be able to step up and do more household chores than usual. 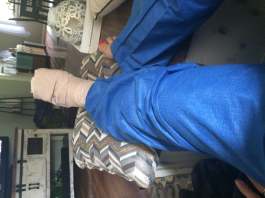 Thankfully, Bride’s family came to aid of Bride and Groom. Shuttling their injured cargo home, picking up prescriptions and doing some heavy lifting, quite literally, around the house for Bride and Groom they then rode off into the sunset.
Now Bride and Groom are quite a pair. One on crutches hardly able to walk, and the other with three holes in his abdomen looking a bit like the Michelin Man. He can walk, albeit painfully, but he can’t lift or twist. But together, persevering in love, and with a lot of help from Youngest Son, they are making it through; at least they’ve made it through three days, they only 45 more to go.

You Figured it Out

If you’ve read this far, you’ve probably figured out this about Janey and I. Needless to say, we’ve had a rough week, and it doesn’t look like it’s going to get any easier. However, I can’t even imagine being in this sort of condition and being in the path of hurricane Harvey. Even as I lament with a little tongue-in-cheek about our situation, I pray for the victims in Texas; God be with them.
We are definitely tempted to ask God why this happening to us? But as MercyMe states in the song The Hurt and the Healer, “healing doesn’t come from asking why.” Instead, we are asking what are we to learn from this. We are both beginning to discern the lessons we’re to learn. I won’t reveal her lessons, but mine are in the areas of resting, slowness, and taking a lesson from 1 Corinthians 12:23 about learning to “bestow greater honor” to the things I’m tempted to regard as “less honorable.”
I’ll be exploring these in a little more detail as I stay home from work for a few days on medical leave. I’ll tease it by stating that it’s funny how we can learn lessons from major body systems that shut down and wake up slowly after having a couple of hours of general anesthesia and pain meds. No, I’m not talking about the cardiovascular or neurological systems; I’m talking about systems that we may be tempted to think are “less honorable.” Stay tuned, I’m hoping it’ll be a fun discussion! 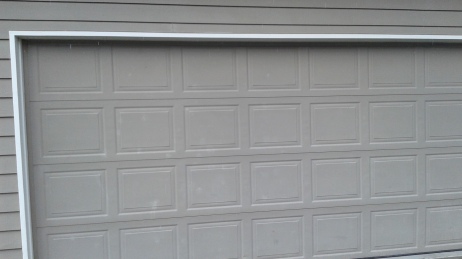 I’ve a taken a break from theological stuff and have following a “deep” and “profound” (wink-wink) haiku on my thoughts heading into the New Year. I call it: The Clash of Idealism with Reality.

…rich with promises. But first—

I know, I have a weird sense of humor! But our garage, probably like yours, was the repository for all the package remains and present remnants in need of recycling. Now our recycle bin is packed full and we have 10 days to go until pick up! 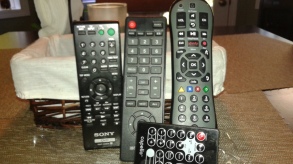 At last, safe at home

Be myself, be raw, relax!